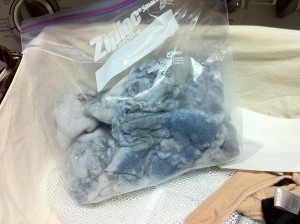 I’m fairly sure one of those evil drug companies offer some sort of medication for this. And even though I’m against all forms of medication (except for those which are self-prescribed), I admit he might need some medical help.

I’m talking about my son. Maybe this is a spillover from his fiancé’s clothes-hanger-organizing obsessive compulsive disorder, or maybe he’s quietly rebelling at the prospect of his mother not doing his laundry; whatever the reason, I’ve come to learn the truth.

My son is a lint collector.

Sure, he hides his disturbing habit behind the pretense of a science experiment, but what sort of scientific inquiry involves collecting the castoff fabric particles which fill the lint trap of a Whirlpool clothes drier?

Never mind the fact that lint can be dangerous. It’s been known to spontaneously combust, especially when stored in a warm dark place such as a belly button. This is why I’m frequently caught with my finger in my navel: I’m only practicing good fire safety habits.

A flaming belly button is something one must avoid at all costs.

Anyway, my son’s problem has gotten out of control, which is why I’ve confiscated his lint stash and hidden it away. I know it will be hard on him, but denial is often the best approach in a situation like this.